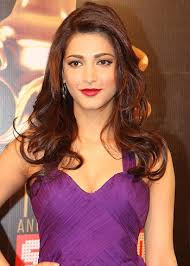 Shruti Haasan is an Indian film actress, singer, composer, works in Telugu, Tamil, Hindi films she is the daughter of the legendary actor Kamal Haasan. She first appeared in films as an child artist in the direction of her father in a movie Hey Ram in which she sang the song along with her father she also sang many songs as a child.

In 2008 she started her actual career for the movie Endrendrum Punnagai opposite to Madhavan, after this film she started off to bollywood opposite to Imran Khan for the movie Lucky which opened with positive reviews in the year 2009. Shruti also worked in a fantasy movie along with Siddharth in the movie Anaganaga O Dheerudu this was co-produced by Walt Disney. Her 2 nd hindi film was Dil Toh Baccha Hai Ji in which she appeared as a guest, in the ending of 2010 she signed up with A.R. Murgadoss opposite to Suriya for the movie 7aum Arivu in which she acted as a scientist and this movie was also dubbed in many languages her appearance was appreciated and The Times said Shruti was one of the actress who is give role as same as the hero, she then worked with Siddharth for the movie Oh My Friend in this movie she will be the friend of Siddharth.

By the end of 2015 she again came up with Gabbar is back a bollywood movie. Recently she signed a couple of movies which are on sets and yet to release the movie names. Shruti also sang song in her recently acted movies. Shruti is the brand ambassador of Lloyd a electric appliances company and Emani Navaratan cool talc she received many awards such as Filmfare, singer awards and many more.